15 Things You Need to Know Before Visiting New Zealand

Planning a trip to New Zealand? You are in for a treat! It is one of the most beautiful countries in the world.

A friend and I had the opportunity to go to New Zealand for two weeks in February. It was an amazing trip! New Zealand is a stunning country and belongs on everyone’s must-visit list.

1. It really is as beautiful as it looks in pictures and movies

Have you ever been disappointed that a particular place is not quite as lovely as it seems in pictures? Well, you won’t be disappointed by New Zealand!

New Zealand really is just as beautiful as it seems in all those pictures and movies. You will be amazed by the spectacular views.

Because of how beautiful it is, I regret not bringing a GoPro or another high-quality video recorder to New Zealand. As amazing as the photos look, sometimes a video is necessary to really capture the majesty of it all. If you’ve been on the fence about buying a new camera or video recorder, I recommend making the leap and purchasing it before your trip to New Zealand.

2. Allow for plenty of time to take in the view & take pictures

Because New Zealand is so beautiful, you’ll want time to just soak in the scenery. And take an insane amount of pictures.

Allow time in your schedule to pull off the road to take pictures or just sit and enjoy a morning coffee while staring at the mountains.

If you’re on too tight of a schedule, you can feel cheated if you don’t have time to stop and take pictures. Or worse – miss a scheduled tour because you couldn’t resist pulling over to get those beautiful shots with your camera.

3. The weather is unpredictable

While you can’t plan for every type of weather occurrence, you can anticipate that summer temperatures will generally be on the mild side. Summertime highs in New Zealand average around 70 degrees Fahrenheit, with the mornings starting out on the cool side. You should anticipate that it will rain at least once during your trip.

If you’re planning on traveling to New Zealand in the summertime, bring layers so that you’re comfortable no matter what the temperature. I was comfortable with a light sweater and two light jackets worn over each other, which I was able to shed throughout the day as the temperatures warmed up. My inner jacket was a slightly fitted athletic jacket. My outer jacket was a loose rain jacket with a hood, which came in handy during rain showers and foggy, misty days.

To give you a sense of how unpredictable the weather is, see below for the exact same view of Queenstown on consecutive days. The first day had partly sunny skies. The very next day was so foggy that Queenstown was barely visible!

4. Be flexible with your plans

Because of the unpredictability of the weather, certain tours or activities will be canceled due to poor weather.

If you have a particular tour or activity that you really want to do, schedule it for one of the earlier days of your trip. That way if it’s canceled due to poor weather, you’ll still have a chance to reschedule for another day later in your trip.

One great tour that’s often canceled is the Queenstown to Milford Sound flight and boat cruise. Even if the weather is beautiful in Queenstown, it can be foggy in Milford Sound. Which results in the cancellation of flights. You can improve your chances of going on this trip by (1) scheduling a flight slightly later in the day so that morning fog has a chance to lift and (2) scheduling the flight on one of the earlier days of your trip so that if you need to, you can reschedule it later in your trip.

If you’re like me and you’re prone to motion sickness, prepare in advance for this. To combat it, I take anti-nausea medication, close my eyes, lean my head back against the headrest, and have the air vent directed towards my chin/neck. I applied these techniques when flying in New Zealand and thankfully didn’t get motion sickness.

Some of these landings are going to be rough on nervous flyers. Just know that they’re very normal for the area and the pilots are very experienced in dealing with these windy landings.

In some countries, you may have gotten used to quickly checking off your customs form and moving through the line without too many questions. Don’t expect that in New Zealand.

New Zealand takes the customs process very seriously because they want to protect their native plants and wildlife. With that goal in mind, New Zealand customs agents are looking for anything that you’re bringing into the country that could potentially harm the native ecosystem.

If you have any type of food – including granola bars or other snacks – declare it. Make sure your shoes and any hiking boots are clean. You don’t want to bring non-native dirt with foreign contaminants into New Zealand. Same goes for any hiking gear or any type of gear or clothing that would have come into contact with dirt in the past. Make sure it’s clean and free of any dirt before entering New Zealand.

If you do decide to rent a car, be aware that it may take some getting used to driving on the left. You’ll need to be especially careful at intersections, where it’s easy to default to your habitual driving habits and enter the wrong lane.

Driving can be even more hazardous because of the many single-lane bridges and narrow roads.

If you have any doubt about your ability to drive safely in New Zealand, I recommend skipping the rental car and going with guided tours. With guided tours, someone else worries about the driving and you can focus on taking pictures or the occasional nap! (This tour was my favorite part of the trip.)

8. The insects are for real

The bumblebee population appears to be alive and well in New Zealand. One tried to assassinate me on the second day of our trip.

Luckily, I discovered I’m not allergic to bee stings! But if you are allergic, make sure you have your allergy medicine with you at all times. If you haven’t had the chance to discover if you’re allergic or not, you can bring Benadryl or similar allergy medication to take as a precaution if you’re stung. (As always, check with your doctor before taking any medicine!)

In addition to bees, another insect to look out for is the sandfly. These are evil, biting critters. They. Will. Not. Leave. You. Alone. I wore DEET-free insect repellent for most of the trip. Although the sandflies still buzzed around me, I didn’t get any bites. Don’t leave home without your insect repellent!

9. Burgers are a New Zealand specialty

Burgers were especially popular in Queenstown, where locals debate over the best place – Fergburger or Devil Burger. I have a strong emotional attachment to Ferburger (I ate there three times in seven days), but I recommend trying both to see which one you like best. Yum…tomato relish…

In general, tipping isn’t necessary. However, we found that it was greatly appreciated when we did provide tips. (In some countries, I’ve tried to tip and the recipient has politely declined to accept it.)

If you like to tip for a job well-done, you can aim for 10% at restaurants and bars and $10 or $20NZ for your guide after a day-long tour.

While traveling in both the North and South Islands, I saw one person in a professional business suit the entire two weeks I was there. I didn’t see a single person in evening attire.

On the North Island, we stayed in Auckland’s central business district, where you’d expect to see people walking around in professional business suits, but that wasn’t the case.

Prepare to see a lot of tennis/running shoes and athletic attire. Even high-end restaurants we visited permitted customers in casual attire. Pack plenty of casual clothes that will allow you to feel comfortable, but also allow you to look neatly dressed. I felt comfortable throughout our trip in athleisure attire.

There were a few moments while walking around airports and in towns that we accidentally fell into the trap of looking like confused, lost tourists.

In many countries, this is a big no-no. It makes you the potential target of people who will try to take advantage of you, like pickpockets.

But in New Zealand, this had the happy effect of people quickly approaching us and asking us how they could help. These kind people weren’t airline or city employees who were paid to help lost souls like us. These were just regular passersby who were too nice to let us remain lost for long.

We encountered similarly nice people throughout the entire trip.

13. You’ll meet a lot of people from other countries

When we were in Queenstown, we went on six different tours, spoke regularly with the hotel and restaurant staff, and generally tried to interact with the local community. We met people from Belgium, England, Australia, the US…and met only two people from New Zealand!

From our conversations, we learned that many of the people from other countries had come to New Zealand expecting to stay just a short time. But they had all fallen in love with the country and quickly made arrangements to come back on a work visa.

Maybe you’ll fall in love with New Zealand and decide to move there, too!!

You’ll find that the people who live in New Zealand absolutely love the country. And they want to share this love with everyone else.

Be prepared to describe your favorite part of New Zealand when you meet someone new. You’ll get asked this question a lot! The hardest part about responding will be picking just one moment.

And don’t be surprised if someone asks you if you plan on moving to New Zealand. Like I mentioned above, many of the people we encountered in Queenstown were from other countries and had relocated to New Zealand after falling in love with the country.

While you’re New Zealand, you’ll catch yourself saying, “When I come back, I’ll…” That’s because the country is addicting! You won’t want to say goodbye – so you cope with it by making plans to come back!

I hope these tips help make your trip as enjoyable as possible. And that you love New Zealand as much as I did. Happy travels! 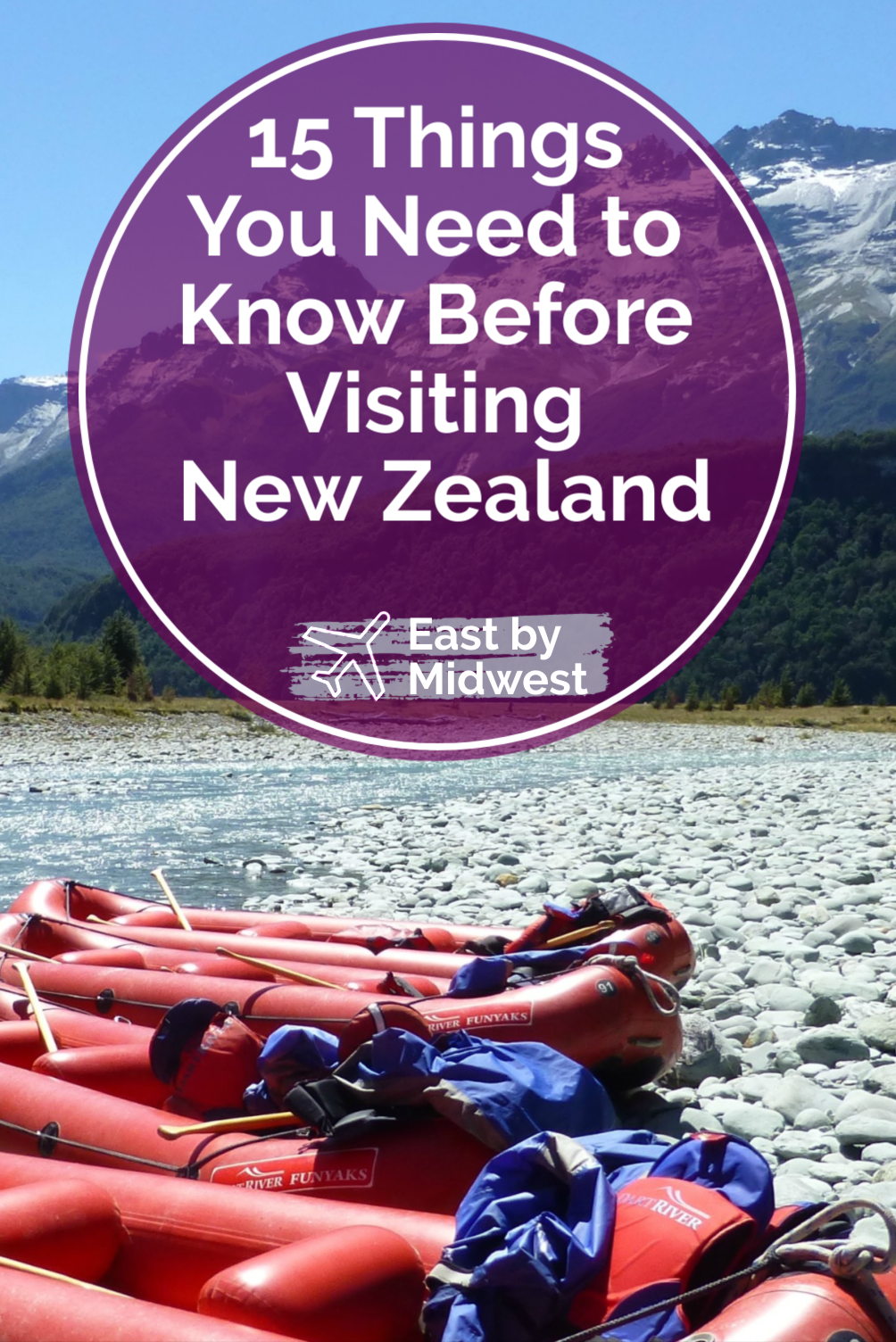 5 Amazing Things You Need to Eat in Queenstown New Zealand

New Zealand Packing Guide: What You Need to Pack for a Perfect Trip

8 Can’t-Miss Things to Do in Queenstown, New Zealand

7 Reasons You Need to Visit the Skyline in Queenstown, New Zealand