Want to use both Instagram Reels and TikTok, but don’t want to invest a lot of extra time? The tips below will teach you how to easily use the same video on IG Reels and TikTok.

The social media world seems to get more crowded every day. It’s easy to get overwhelmed by the sheer number of places to post content.

It’s just not possible to create 100% unique content for every social media platform and still find time to eat and sleep.

To keep your sanity, use the shortcuts below to easily use the same video on IG Reels and TikTok.

This isn’t a problem if the video you want to share is less than the maximum length on both platforms. But it can be problematic if the video length exceeds the limit on one of the platforms. Just double-check this requirement so you don’t end up frustrated after creating an awesome video that can’t be shared on the other platform.

In the U.S., copyright exists upon creation of a work (video, music, audio, etc.). There are plenty of caveats to this, but unless you are pretty well versed in U.S. copyright law, I’d steer away from other people’s work when sharing videos on multiple platforms.

Unless you’re using your own audio, I recommend removing the music before you load a video to another social media platform. You can then add approved music using that platform’s music search tool.

Now to the good stuff! Here are some ways you can use the same video on IG Reels and TikTok:

One way to easily use the same video on IG Reels and TikTok is to create a video in TikTok and then download the video to use on IG Reels.

TikTok has more features than IG Reels (like the ability to use still photos and change how long text appears on the screen). To take full advantage of TikTok’s features in both your IG Reels and TikTok videos, you’ll want to create the video in TikTok first.

After creating and posting your video in TikTok, play it from your “Me” screen.

In the resulting pop-up screen, click on the “Save video” option. The video will now be saved to your phone.

This creates a video with a “TikTok” watermark. If you don’t mind the watermark showing in your video, then your work here is done! Simply load the video to IG Reels and you’ve created one video that can be used on two different platforms.

But if the watermark does bother you, this article will show you how to easily remove the TikTok watermark before posting the video to IG Reels.

IG Reels doesn’t have as many features as TikTok, but it is much easier to download a video from IG Reels and use it in TikTok than it is to do the reverse.

This is because IG Reels downloads don’t have any watermarks. You also have the option of downloading the IG Reels video in two different places. Once during the creation process and once after completion.

Downloading a video from IG Reels during creation

Because TikTok’s text editing tool is more advanced than IG Reels, I like to download the IG Reels video before I’ve made any edits to it. That leaves it a blank slate for easy editing in TikTok.

To download an IG Reels video during the creation process, start by loading video clips to IG Reels. Once you’re satisfied with the combination of video clips, click “Next” until you’re in the edit screen (see below for what this screen looks like).

Click the download button to save a copy of the video clip you’ve created directly to your phone.

After I complete this step, I’ll then go ahead and finish making the IG Reels video. Next, I’ll load the video I downloaded from IG Reels into TikTok and will make additional edits to the video in TikTok.

This results in the videos having slightly different edits. I like this approach because I can tailor the final edits to match the aesthetics of each platform.

Downloading a video from IG Reels after completion

You can also download a video from IG Reels after you’ve completed and posted it.

To do this, play one of your IG Reels videos.

In the lower left-hand corner, you’ll see three dots. Click on those dots.

In the resulting pop-up screen, click on “Save Video”. This will save a copy of the completed IG Reels to your phone.

You can then load the video to TikTok and make any additional edits you’d like.

Another way to use the same video on multiple platforms is to make a recording of your phone’s screen while a video is playing.

While it’s super easy to make a screen recording, both IG Reels and TikTok have several icons partially obscuring the screen while a video is playing.

So if you make a screen recording of a video playing in either IG Reels or TikTok, you’ll probably want to crop out those icons. And by cropping out those icons, you also lose a portion of the video screen.

If you do want to make a screen recording of a video, then here are instructions to do so:

Create a video in IG Reels or TikTok

First, make a video entirely in either IG Reels or TikTok (whichever one you prefer).

Make a recording of that video using screen record

Next, open your phone’s screen record app. If you’re not sure where this is located, search for “how to record screen on [your phone version]”. Most later model Apple and Android phones have this as a built-in feature.

You’ll then start the screen record app so that it’s recording your screen.

While your screen is being recorded, play the video you created in IG Reels or TikTok. The screen recording will capture the video as it’s playing.

Crop out the icons

To crop out the icons that show when a video plays in IG Reels or TikTok, you’ll probably need a third-party app. Search your phone’s app store for “video crop”.

You don’t need a lot of bells and whistles here, so a simple app that only crops video is fine. I use Smart Video Crop on my Android phone. For Apple phones, Video Crop has great reviews.

Load the screen recording to IG Reels or TikTok

After cropping out the icons, load the resulting video to IG Reels or TikTok. That’s it!

Create the video in another app

Another alternative is to make the video in an entirely different app.

There are several great video editing apps where you can create an entire video. You can then load this video to both IG Reels and TikTok without making any edits to the video on either platform.

Social media can be overwhelming. But simple tricks like using the same video for both IG Reels and TikTok can help us to save time (and our sanity!). Happy posting! 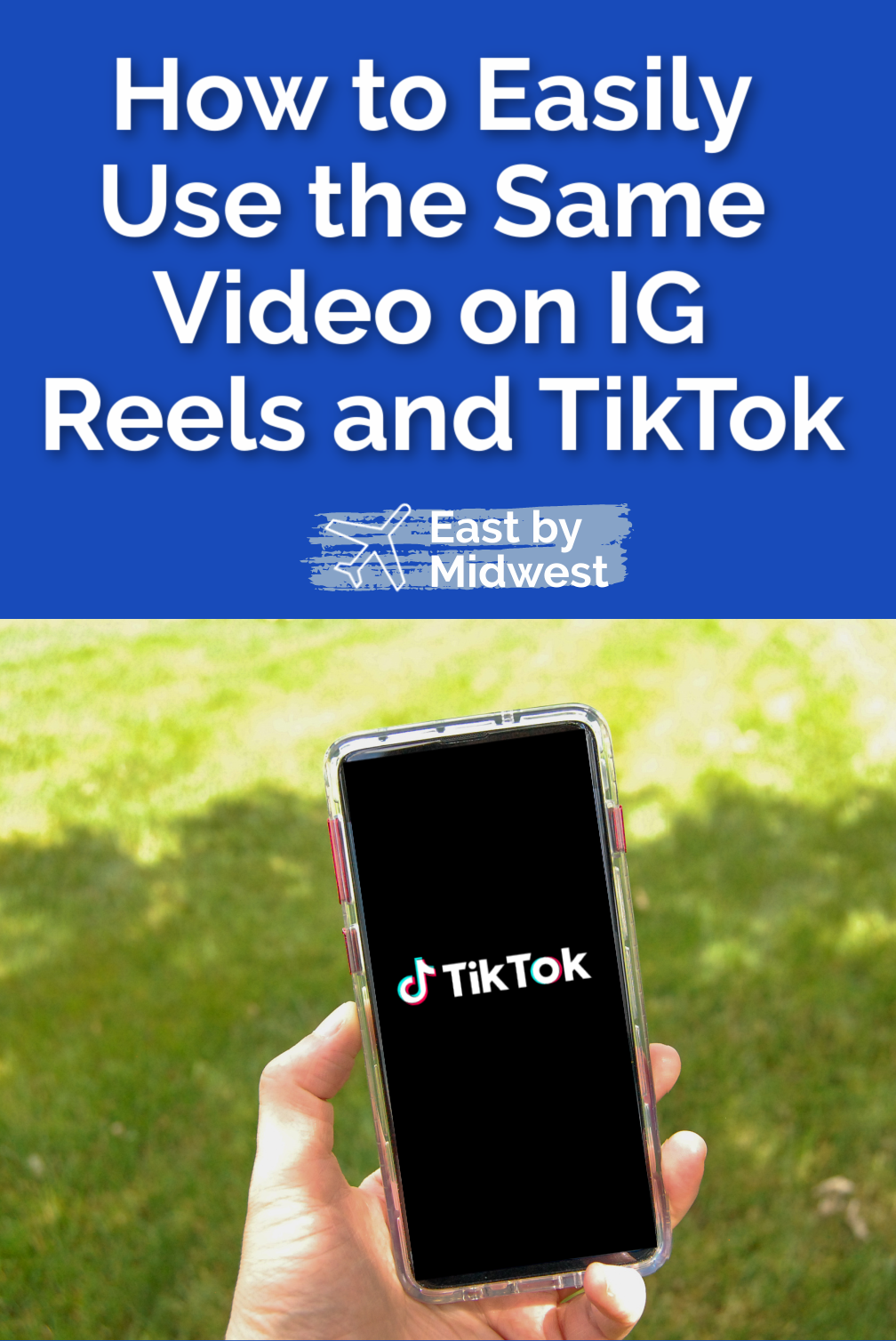 How to Remove the Watermark from TikTok Videos