10 Things You Need to Know Before Buying a Drone

I love my drone. On Pam’s list of favorite things, it ranks pretty high up there.

But I realized after purchasing my drone that I wasn’t as informed as I should have been when I made the purchase. A number of things have surprised me about owning and operating a drone.

To help you make an informed purchase, I’ve included the things below that I wish I had known before buying a drone. With any luck, you’ll feel more confident about buying a drone and we can swap drone flying stories soon!

1. Drones have lots and lots of flight restrictions

Many drones are pretty small. And that can lure you into thinking that it’s just a little toy aircraft that you can fly pretty much anywhere. But that’s not the case.

There are a number of restrictions on where and how you can fly your drone. Here are just a few examples of flight restrictions in the United States:

As a drone owner, you’re responsible for knowing and complying with drone flight restrictions. You can read more about the restrictions here.

Because these flight restrictions can be a little overwhelming, this is one area that is really important to understand before buying a drone.

2. Drones are illegal in some countries

Because drones are illegal in some countries, that means you can’t even enter that country with one. Even if you’re just there on a layover on your way to another country.

Bringing a drone into a country where they are illegal means your drone may (probably) be confiscated. It also exposes you to the risk of being detained, interviewed, and potentially jailed.

If you plan on traveling internationally with your drone, check to make sure every country you’ll be touching during your trip permits drones. You can usually find out this information via a Google search.

The quickly-moving drone propellers create a high-pitched whining sound. Even the smallest drones create this noise. My drone can fit in the palm of my hand and it’s still insanely loud.

So if you think you can fly your drone without drawing too much notice, think again. The sound of the drone will draw attention to it.

This is something I wish I’d known before buying a drone. I’m sometimes nervous to fly the drone because of how loud it is. Just be prepared for the sheer volume of the drone propellers!

4. Drones can scare or cause stress to animals

Because drones are loud and move in a somewhat haphazard way, they can really scare or cause stress to animals.

A scared or stressed animal can behave erratically, which could cause harm to them, you, or someone else.

As much as possible, try to avoid flying your drone where animals are present. And never fly over or near them.

The noise and movement of drones don’t just bother animals – drones can make people anxious, too.

People can be worried about being recorded or that the drone will hit them or their property.

People don’t like being surprised and a drone’s sound and movements can be very surprising when people aren’t expecting it. Avoid potential conflicts by letting people know your plans to fly the drone.

6. Drones can be difficult to fly

I’ve owned two different kinds of drones. I found the controls to be very sensitive with both. That means that a slight nudge of my thumb can send the drone speeding off.

When you’re learning to fly your drone, start in a big open area (like a field). This will give you an opportunity to learn how to use the controls without damaging your drone or accidentally hitting something (or someone!).

7. Drones can distract you from your surroundings

When you’re focusing on flying your drone, you’re trying to monitor its flight pattern. You want to make sure that it doesn’t hit anything and that it’s recording interesting things.

But that means that you’re not very aware of what’s happening on the ground around you. You don’t know if other people or animals are approaching.

I once landed my drone on a country road with very little traffic. I was so focused on the drone that I didn’t realize that a car had approached from behind. Thankfully, they were very kind and came to a stop. But it could have been a very bad situation.

You may find it helpful to fly your drone with friends or family present so that they can monitor the scene around you.

8. Drones can have a limited battery life

Drones aren’t known for their battery life. Of the two drones I’ve owned, both have had a battery life of about 15 minutes.

So if you’d like to fly your drone for a longer period of time, you’ll likely need a spare battery or two.

For extra protection, I carry my drone battery in a fireproof bag while traveling. I don’t want to take the risk of causing any emergencies.

10. Drones can take up a lot of room in your luggage

Drones and their accessories (remote controller, charger, spare batteries, etc.) can take up a lot of room in your luggage when traveling.

I’ve had two drones – a pretty big one and my current, smaller one. With my bigger drone, I found that I didn’t take it traveling as much with me because I didn’t want to find room for it in my luggage. With my smaller drone, I’m more likely to bring it along because it doesn’t take up as much room in my luggage.

So when getting ready to make your purchase, just remember that size does matter before buying a drone! 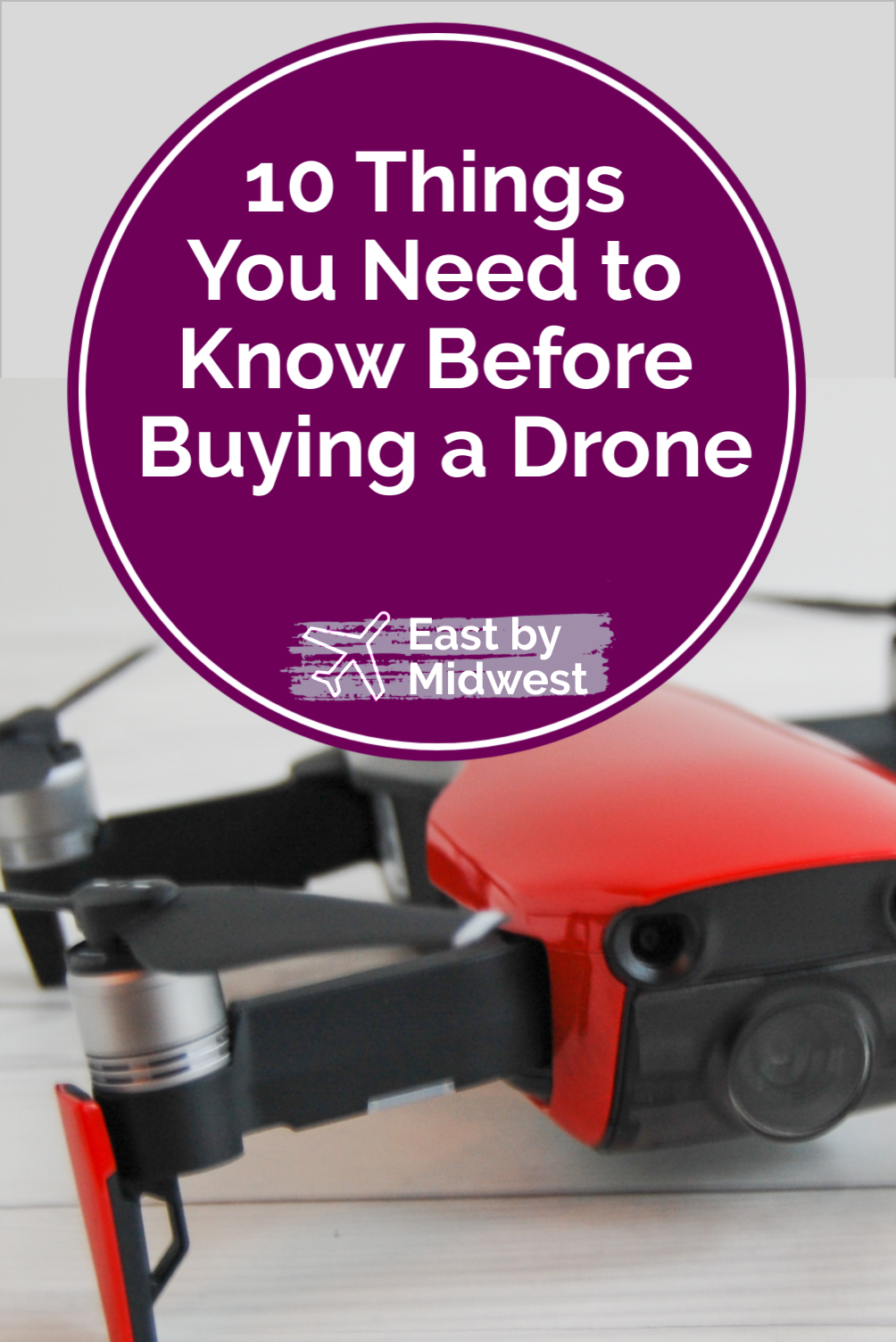 Lost or Delayed Luggage: What to Do and How to Get Compensated

17 Disastrous Travel Mistakes and How to Avoid Them

Best Travel-Themed Decor That Will Make Home Feel Like Vacation

How to Plan a Fantastic Trip to Iowa

The Best Toiletry Bags for Every Traveler

Outer Banks Travel Tips That You Need to Know